Those individuals, who were injured while serving, are then taken on an outdoor experience.

Producer Dave Morse says the show is used as a form of therapy.

Local veteran Sam Floberg, who lost his leg while serving, will be in the first episode.

Sam Floberg/Featured on American Heroes Outdoors, “Just being out on the water, being in nature, everything just goes away. The only thing you have to worry about is what’s on the end of a hook or if you see a deer or whatever.”

The first episode of American Heroes Outdoors will air on Sunday April 5th at 8:30 a.m. on Fox Sports North. 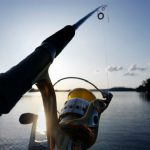